”If paradise was on Earth, it would be here,” wrote Nikos Kazantzakis, Greece’s foremost 20th century writer, about the short spell he spent as a teenager in Naxos’s fertile valley of Eggares.

The nature of Naxos talks to the heart of every artist with its authenticity, richness and simplicity. The island is marked by great variety:

Just pick your route, either on or off shore, and abandon yourself to the magic of Naxos’s nature. The thrill is there throughout the year.

Naxos has an area of 430sq.km and a coastline of 148km. It is a mostly mountainous island, with a widely alternating landscape (mountaintops, torrents, gorges and caves, predominantly encountered in the northwestern, northeastern and southeastern sections of the island). The flat areas (basins, plateaus, valleys) are found in the central and southwestern parts. The greatest part of the island’s coastline is laced by pretty beaches, while almost the entire western coast is an endless string of long, sandy beaches. Naxos’s geological structure mainly consists of stone transformed into marble, emery, slate e.t.c.. The western section is dominated by granite, to which the beaches owe their formation. The significant alternations in geomorphology and the climatic conditions of the hinterland make Naxos a unique island which combines the rarity of the Cycladic landscape with the beauty of mainland Greece.

Starting from the sea zone and the coastline, then crossing the lowland areas and ending on the hills and uplands, a visitor comes across a spate of natural habitats unlikely to be found in on any other Cycladic island.

Mount Zas and its cave

The summit of Mount Zas, which rises southeast of the village of Filoti, is the highest peak in the entire Cyclades region, with an elevation of 1,003m. According to mythology, god Zeus spent his childhood years here and an eagle was said to have offered him the thunderbolt at the top of this mountain which subsequently helped him reign supreme on Mountain Olympus. Besides its mythological interest, Mount Zas is endowed with wonderful natural beauty -a great place for trekking through old and very scenic routes.

Two important streams that start from the massifs of Koronos and Fanari run north and south of Keramoti respectively.

The two rivers converge at the western end of Keramoti, at a point named Dipotamata. Continuing its flow through rocks and rich vegetation, the stream unites with a creek running from Kanafa to create the Routsouna waterfall, a spectacular 20m drop. A plane tree is rooted at its base, while a lake of considerable depth offers a delightful swimming basin for Keramoti’s youngsters during the summer months. From here, the water continues its flow all the way to the fields at Eggares and irrigates the area before reaching the sea, at Ammitis beach.

The area’s water, which maintains its flow even during the summer months, creates an enchanting verdant locale that differs greatly from standard Cycladic settings. A uniquely beautiful path, starting near the old bridge of Keramoti, leads to the waterfall.

Naxos’s white marble has been one of the island’s most important natural resources since antiquity. It is mostly found on the western section of the island and its quality rivaled the marbles of any other origin.

Quarries are seen in various locations – the most important being the one near the village of Kynidaros, which has an imposing presence and makes for a lunar landscape that extends from the mountain side to the main road. Marble in antiquity was the exclusive material used in sculpture and its significance is shown by the island’s ancient quarries (Flerio, Melanes, Apollonas). Splendid examples of the use of marble were the ancient sanctuaries of the Temple of Apollo, of Gyroulas at Sagri and of Dionysus at Yria. The fact that the first marble statue of a large size was sculpted on Naxos in 660 BC (Kouros) signifies the importance of the art of marble sculpture on the island, which is retained to this day. Examples of this art can be admired on various buildings dispersed throughout the island, both ancient and modern.

Emery, a very hard type of rock with important industrial uses as an abrasive and burnishing agent, is found in abundance on the slopes of Mt. Amomaxis of Naxos, between the villages of Koronos and Apiranthos.

It is dark gray or black in color and the superior quality of Naxos emery (smirigli in the local dialect) has been known since antiquity. Virtually the sum of emery deposits that can be mined in Greece are found on the island. The mining of emery was a hazardous occupation but also a significant factor in the survival of the inhabitants of the villages in the Naxos uplands. 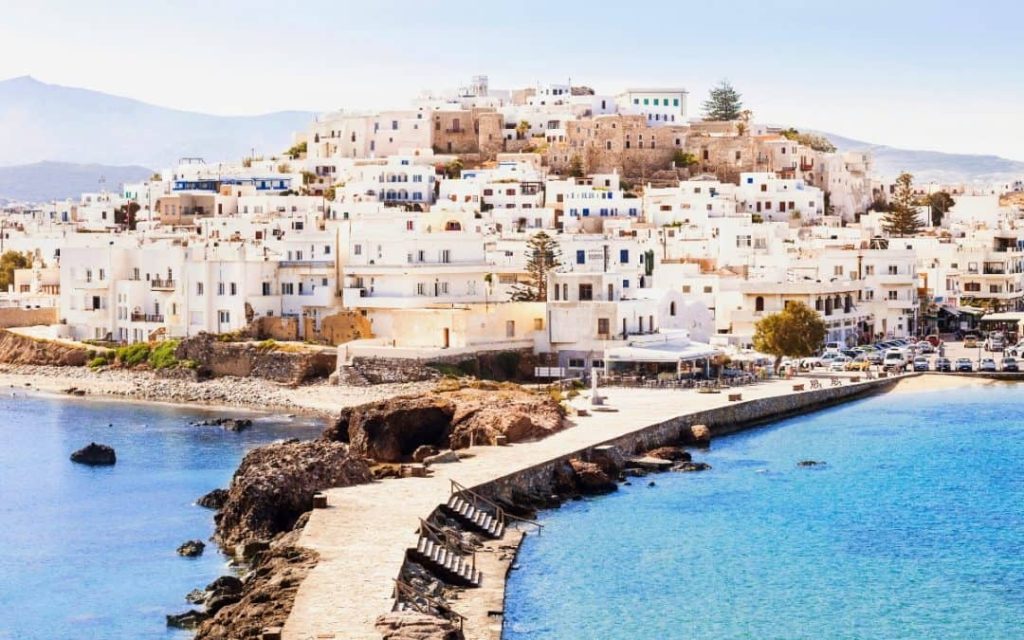 Designed and developed by Reborn Digital